A homily, based on Mark 8.31-38, preached with the people of the Episcopal Church congregations of All Saints’, Clinton, SC, and Epiphany, Laurens, SC, on Wednesday, February 21, 2018

“Who do you say I am?” Jesus asked his disciples.(1) Peter, always the one with the greatest temerity, though, oft too, with the least lucidity, for once gets something right: “You are the Messiah!”(2)

His identity established, it is essential, crucial that Jesus declare what kind of Messiah he is – one without a messiah-complex, one without any pretensions of earthly conquest and glory, one who will suffer and die, and, yes, be raised from the dead. Still, the shock of his announcement leaves the last lost on his disciples and, once again, Peter, fearlessly, if also stupidly, speaks up, rebuking Jesus, provoking Jesus’ sternest response, calling Peter by the name of the chiefest adversary, greatest tempter and tormentor: “Satan”! 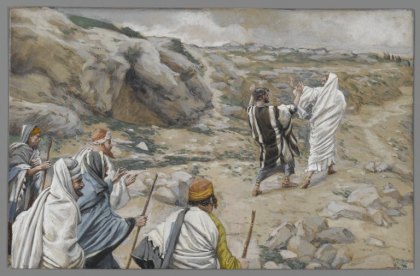 But let’s not be too hard on Peter, who, in this story is our representative. Thus, let us not be too hard on ourselves. For Palestine is overrun by an oppressive Roman Empire and within the lore of the law and prophecies of Judaism, there are two distinct strands of Messianic thought – one, a triumphal conqueror fashioned in the image of King David; the other, a suffering servant. Speaking for myself, if I was oppressed, which Messiah would I want to come to my rescue? One who would liberate me from my travail or one who would share my trials? The first!

Yet, notwithstanding our understandable expectations, Jesus, having defined his Messiahship, describes our discipleship. As no servant is greater than the master, as he goes, so do we, following along his self-denying, cross-bearing, life-losing way.

Jesus tells us this not because he is a glutton for punishment, his or ours. Jesus is not a masochistic-sadist, but rather a realist. For this, self-sacrifice for the sake of love, is the way of God, Jesus’ God, our God who creates, redeems, and sanctifies. And this, self-sacrifice for the sake of love, is the only thing that can ennoble and embolden us to live life in this world where the next test, trial, or tribulation (and last Ash Wednesday-Valentine’s Day’s massacre of seventeen of our sisters and brothers at the Marjory Stoneman Douglas High School in Parkland, Florida, being a most recent example…a most egregious reality) is always but the next moment away.