A homily, based on Mark 11.1-11, preached with the people of the Episcopal Church congregations of All Saints’, Clinton, SC, and Epiphany, Laurens, SC, on Wednesday, March 21, 2018

Jesus enters Jerusalem. This is the denouement of the story of his earthly ministry. His story that began with his baptism in the River Jordan at the hands of John the baptizer, and then his arduous temptations in the wilderness, and then his inaugural word of the essence of his life and labor, “The kingdom of God is at hand”, and then the call of his disciples, and then his teaching and preaching and healing, exercising his authority o’er the realms of time and space, flesh and spirit, and then the increasing, deepening, death-scheming hostility of the worldly secular and religious powers and principalities.

And now, entering Jerusalem, Jesus, proverbially, tosses the gauntlet, crosses the Rubicon, the line in the sand to face the final confrontation with his enemies; all who cherish their status quo of zealously-guarded prominence and privilege, rejecting the gospel of God’s love and justice for all. 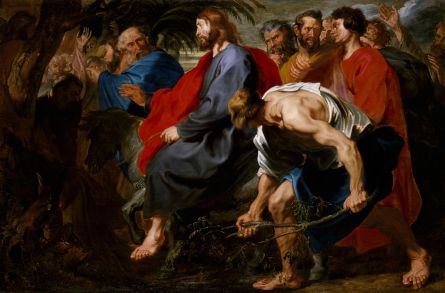 Yet what an odd entry it is!

First, shrouded in the shadowy mystique of inscrutable directions. “Go, find the colt that never has been ridden.” How do you know that, Jesus? And “If anyone says, ‘What are you doing?’ say, ‘The Lord needs it’.” How will they know that, Jesus?

Then, shining in the light of understated dimensions. Jesus rides a colt, a donkey. Jesus, why not a majestic, regal steed? He is accompanied by crowds of his disciples and common folk. Jesus, where is the triumphal entourage? The crowds cry, “Hosanna!” Jesus, why are they not praising you as “Son of David” or “king” or “King of Israel”?(1) Jesus goes to the temple, looks around, and leaves. Jesus, what happened to the symbolic ritual of claiming your authority; taking up residence in your temple?

But that’s precisely the point. Jesus, from the beginning and throughout his ministry, told and showed his disciples and, throughout time unto this our very day, through scripture, the stories of the saints and all faithful followers, Jesus has told and has shown us that his Lordship is Love, his power is self-sacrificial service, his grandeur is humility, his throne is the cross of his saving dying, and that his disciples are those who live likewise.

It’s always been and always will be that simple and difficult.

2 thoughts on “His Understated Triumph”