“Now is the judgment of this world. Now the ruler of this world will be driven out. And I, when I am lifted up from the earth, will draw all people to myself.” 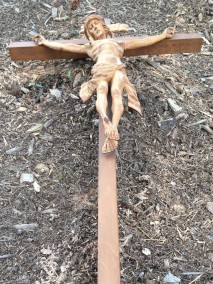 Jesus knows that he will die at the hands of all who oppose him and the good news of the kingdom of God that he has proclaimed. He speaks of his death. His words, purest paradox; making no sense, yet, we pray, embodying truth. For what sense does it make that in a contest between enemies, when, in the end, there are winners and losers, for Jesus to speak of his death, surely from a worldly perspective, failure, as an act of judgment of the world; even more, the defeat of the world’s ruler, principally Satan, the literal figure and metaphorical symbol of all that denies and defies God? What sense? None.

Yet behold this deeper truth. Jesus’ death proves the utter bankruptcy of the enemies of God, the enemies of unconditional, universal love and justice. For they, with malice and in violence, have one final blow to cast – always death, never life – beyond which there is nothing else they can do…

And once and every time the deed of death-making hath been done, the condemnatory judgment of the ways of the world – “That’s all you ever can do!” – resounds throughout the universe.

Now, behold this deepest truth: “Very truly, I tell you, unless a grain of wheat falls into the earth and dies, it remains just a single grain; but if it dies, it bears much fruit. Those who love their life lose it, and those who hate their life in this world will keep it for eternal life. Whoever serves me must follow me, and where I am, there will my servant be also.”

From the single grain of Jesus’ death, for two millennia and counting, the fruit of countless followers hath come. Followers who, as Jesus, know the power of the daily dying of self-sacrifice for a cause greater, better than self; that of doing, being love and justice in the service of others.