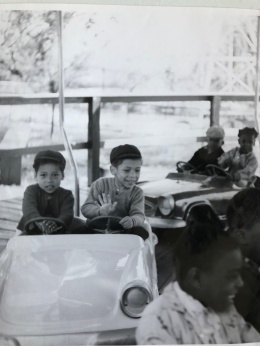 ‘Twas a time
(as humans reckon time, not that long ago!)
when life was all (well, mostly) fun and laughter;
when bumper-cars were an apt metaphor
for amusement as the fruit of simple pleasures,
being the chiefest pursuit that hearts raced after
goin’ ‘round an’ ‘round,
chasing others ‘round and, catching them,
runnin’ them to ground,
and (with no pretense or sense of trying to avoid them,
though inflicting no harm) crashing into them.

Yet time, inexorably, marches on, standing not still ‘til
things change,
life’s scenery, torn and rearranged,
life’s once, past-tense sense
becoming a new, nowadays nonsense,
marked by the closing of a park…

Another apt metaphor,
e’en more, for the embittering of pleasures,
where chasing, catching, crashing…

(whether, formerly thought to be reserved only for sanctioned battlefields,
now, truly, long ago and ev’ry day took, takes place
on street corners and in alleys,
in penitentiaries,
on lynching-trees,
in schools,
in churches, synagogues, and mosques,
in homes and bedrooms,
in newsrooms,
in the firmaments of government,
in nature’s defilement,
still, with no pretense or sense of trying to avoid)

…were, are intended to inflict hurt;
and all, any innocence,
by violence,
on these savage, sacrificial crosses of change,
long since was, is toss’d
and fore’er lost.

4 thoughts on “Ages of Amusement?”