A sermon, based on Mark 6.1-13, preached with the people of Epiphany Episcopal Church, Laurens, SC, on the 7th Sunday after Pentecost, July 8, 2018

Going home. A universal metaphor for our human want, need for connection, communion.

Going home is the heartbeat of the parable of the prodigal son.(1) He rashly, rudely demanded, then recklessly spent his inheritance. Coming to his senses, he headed home to beg his father to take him back as a slave. His father, whose love was as prodigal, as outrageously extravagant as his son’s ethics and economics, welcomed the return of his son.

My mother, in the earliest stages of Alzheimer’s disease, still capable of thought and speech, yet no longer recognizing the house in which she had lived for fifty years, often cried, “I want to go home!” It took me a while to figure out that she yearned to return to her childhood residence to be with her mother, father, and sister.

In Christian theology, this heart-ache for home ultimately is fulfilled when life and labor are o’er as we cross the threshold of death, entering the fullness of eternity. Some religious traditions refer to the funeral as a “homegoing”; that final stage of the pilgrim-journey of return to God. The Apostle Paul wrote: “Now I see in a mirror dimly, but then face to face. Now I know in part, then I will know fully as I have been fully known.”(2) William Arms Fisher, a pupil of Antonín Dvořák, penned these words to the second movement of his mentor’s Ninth Symphony:

Mother’s there ‘spectin’ me. Father’s waitin’, too.
Lots of faces gather’d there. All the friends I knew…(3)

Going home. A universal metaphor for our hunger for connection, for communion.

Sometimes it doesn’t work out that way. Sometimes going home can disappoint.

Jesus inaugurated his ministry, proclaiming, “The kingdom of God is at hand.” He called disciples. He taught, preached, healed, perform miracles. News spread that he was a prophet with plenipotentiary power; enabling him to speak and act in God’s name.

It was time for Jesus to go home. To share with those who knew him first who he had become with the gifts and graces of his new life.

All began well. His teaching astounded the people. He spoke with authority. Not in the familiar scribal style of rote-memorization and repetition, but in a way paradoxically primal and novel; breathing new, deeper meaning into ancient words.

Then the spell was broken by familiarity’s contempt; that self-satisfied confidence that sees people only through the lens of assumed details, “facts” about them. The crowd, once amazed, now dismissive, “We know you, Jesus!”, rejected him. 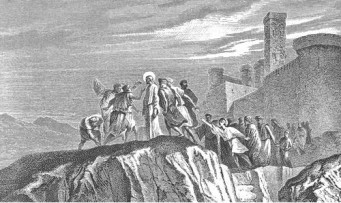 This homegoing tale gone bad offers this life-lesson: The inherent powerlessness of power. Power. The capacity to do something, to have an affect on a person or thing so to yield an effect.

The exercise of power, and I’m not talking about brute force, but rather effective, faithful action for the common good must be complemented by our welcome. Even with God. For God, who is Love, does not forcefully drag us kicking and screaming into the kingdom. God invites us and awaits our acceptance.

The people, unbelieving, didn’t welcome Jesus. Yet, after his rejection, Jesus “went among the villages teaching.” He did not storm off in self-righteous indignation, taking his gifts and graces elsewhere and to others who would appreciate them and him! Jesus, the incarnation of God’s Love, respected the people’s right to choose their response to him. And, not dwelling on his defeat, he continued the work he had been given to do.

Herein, the most important lesson. Jesus is the way, truth, and life of going home. The way of our comfort with ourselves just as we are. The truth of our need to accept others just as they are. The life of our continuing to become who we are meant to be as created by God, as called by Jesus, as commissioned by the Holy Spirit. For going home, in this world and into the next, is about being at peace with ourselves, with others, and with God.

Illustration:
Jesus rejected at Nazareth, F. Alexandre Bida (1813–1895). Note: Bida depicts the crowd at Nazareth gathered around, pressing in on Jesus (the haloed figure) with angry gestures and threatening postures.