In 1902, Finley Peter Dunne,(1) a Chicago humorist, coined the phrase “comfort the afflicted and afflict the comfortable” to describe the necessary role of the newspaper industry in reporting crime and corruption. Thereby, comforting victims with the possibility of reparations and afflicting perpetrators with public exposure and the possibility of retribution. In 1987, theologian Martin Marty,(2) applied Dunne’s observation to the nature of God and the ministry of the church.

This morning’s gospel passage is biblical testimony to this application. Even more, a negation of that notion, popular in some circles, that religion and politics do not, cannot, should not, ought never mix. Still more, a refutation of the idea that Jesus was…is concerned solely with the health of our souls for eternity and not with the state of our lives in this world. For the encounter between John the baptizer and King Herod exposes the dimensions, the dynamics of the unavoidable intersection of the spiritual and political realms.

Herod was the Rome-appointed puppet-king of Judea; a subjugated province within the Empire. John the baptizer, as a herald of the coming of Jesus as Messiah, also, as God’s prophet, spoke truth to power, condemning Herod for taking Herodias, his sister-in-law, as his wife.(3)

Herod, to appease his wife, put John in prison; truly, protective custody to spare him from Herodias’ wrath. John, though incarcerated, continued to speak against the king, who, though perplexed, for who enjoys condemnation, knew that John spoke truth. 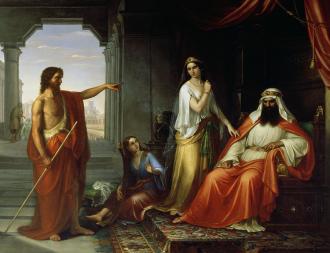 Then came the king’s birthday. Herod, not only a lawbreaker, but also susceptible to decadent, drunken overstatement, made a public, therefore, irretractable promise to his dancing daughter of up to “half of my kingdom.” (Clearly, Herod, despite his manifold flaws was not like the politician of note who says something and is on record having said it, nevertheless denies saying it!) And she, at the bidding of her mother, asked for and received “the head of John the Baptist on a platter.” 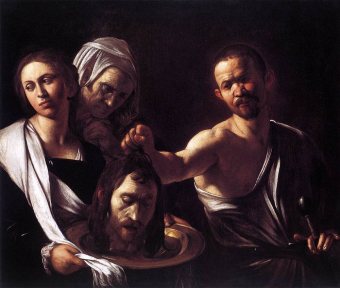 Ancient is the message and timeless the meaning that to challenge those in power is to risk, to invite punishment, even death. So, for John the baptizer. So, for Jesus who, in proclaiming in word and deed the nearness of God’s kingdom of unconditional love and justice for all, necessarily challenged the secular and religious status quo of privilege for the few and power wielded over the many.

Several Sundays ago, I reflected on the relationship between Eli, the aged priest, and Samuel, his young charge. I spoke of what happens when movements become institutions and the inevitable temptation of self-preservation and the equally predictable drift away from the initial motivating ideal. So, it was that Eli, who had strayed from God’s righteousness, would be confronted by God’s condemnatory judgment uttered by Samuel who symbolized the prophetic impulse that speaks truth to power.(4)

Our Presiding Bishop, the Most Reverend Michael Bruce Curry, from his first day in office, now nearly three years ago, unto this day, constantly refers to our church as “the Episcopal branch of the Jesus Movement”, which he furthers describes as our “following Jesus into loving, liberating and life-giving relationship with God, with each other and with the earth.”

I would add that as institutions, as a result of the inertia of self-preservation, tend to stand still and movements, electric and magnetic, move. Truly, it is difficult, nay, impossible to follow Jesus by standing still.

In the name of love, indeed, to follow the One who is Love, we, as individual Christians and as a Christian community, are called to continue to carry out the ministry of Jesus. We are called to comfort the afflicted. Who are the afflicted? Any one of us and anyone who suffers at the hands of natural calamity or human iniquity. And we are called to afflict the comfortable. Who are the comfortable? Any one of us and anyone who stands still and unmoved by the suffering of others.

Salome with the head of John the Baptist (1607), Michelangelo Merisi da Caravaggio (1571-1610). Note: Though Mark 6.22 identifies Herod’s daughter by the same name as his wife, Herodias, other scriptural authorities read, “the daughter of Herodias.” Moreover, Flavius Josephus (37-100 CE), an ancient historian, identifies Herod’s daughter as Salome (Antiquities of the Jews, Book 18, Chapter 5, Line 136).