I love this morning’s gospel story. 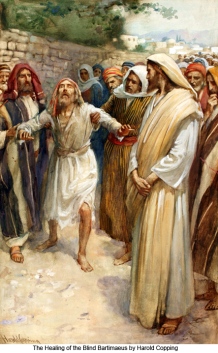 One reason. In daily, real-world terms, it testifies to the power of our names.

That we have names by which we are known. We are not nameless; at death, forever to be lost, unrecalled, in the ever-rising sea of humanity’s history.

So, Jesus, passing through Jericho…

– and let us remember that Jesus is on his way to Jerusalem, thus, passing through Jericho is no leg of a pleasant pilgrimage, but a stage in his perilous journey of destiny, his final confrontation with the authorities who reject his proclamation of the unconditional and impartial love and justice of the kingdom of God for all people; a confrontation that he thrice hath declared to his disciples will result in his death(1) –

…“stood still” at the sound of Bartimaeus(2) calling his name, who added the title “Son of David.”

Here’s another, deeper reason I love this story. Bartimaeus, though blind, helps us to see the profound difference between sight and recognition. Though with our eyes, we can see, we may not recognize always what or who we see.

Years ago, Pontheolla and I visited the Musée d’Orsay in Paris, with its treasure trove of impressionist art. Drawn to one particular painting, I stood too close. I could see, but only splotches of brilliant color. Heeding Pontheolla’s counsel to stand back, only then did I recognize, could I recognize the scene of sky and water of van Gogh’s Starry Night Over the Rhône.

Bartimaeus, though blind, recognizes Jesus as the “Son of David;” a Messianic title of the long-awaited, God-sent redeemer. Knowing Jesus, Bartimaeus also knows for what he can ask; what is in accord with who Jesus, as the Son of David, is and what Jesus does.

The Apostle James warned his Christian community about the inefficacy of their prayers: You ask and do not receive, because you ask wrongly, in order to spend what you get on your pleasures.(3)

Many have been the times when I, believing, knowing, also as James teaches, that God is the giver of all gifts,(4) prayed for something I wanted, something I believed I needed. When it was not granted, I realized that I had mistaken my human expectation for divine intention, my will for God’s will.

So, a rich man came to Jesus, asking, “What must I do to inherit eternal life?”, thinking, believing, hoping that this gift of God could be won by human effort. Jesus loving him, seeing him, knowing him, that he placed great, too great value on his material possessions, advised him to sell all he had, give the money to the poor, and follow him. That man, shocked, couldn’t, wouldn’t do it.(5)

So, James and John, beating their fellow disciples to the punch, asked Jesus to stand at his left and right in his kingdom. They wanted to share the glory of what they thought, believed, hoped would be Jesus’ triumph when he went to Jerusalem and claimed his rightful throne as the King of Israel. They didn’t understand that Jesus’ victory would be his crucifixion; his throne, a cross.

Bartimaeus desires only God’s lovingkindness: “Jesus, Son of David, have mercy on me!” Jesus calls Bartimaeus, who, though blind, not lame, “springing up,” comes to Jesus. Jesus asks, “What do you want?” And Bartimaeus, again, recognizing who Jesus is, can declare what God’s mercy looks like: “My teacher, let me see again!” And his believing, his knowing is granted, “Your faith,” says Jesus, “has made you well.”

Of all the things that we, in this life, might desire, may need for ourselves, to recognize who God is, is to know that God, utmost, wants us to see, to know, to love God. For it is in that relationship that our continuing transformation into who God creates, Jesus redeems, and the Holy Spirit sanctifies us to be can happen.

A contemporary gospel song, for me, expresses well, expresses faithfully this seeing, this recognizing, this understanding:

Illustration: The Healing of the Blind Bartimaeus, Harold Copping (1863-1932)

2 thoughts on “Seeing and Knowing”