John is on a mission. He’s in a holy hurry. Summoned by God, he has emerged from the wilderness to herald the advent, the coming of God’s Messiah; the one who will usher in the kingdom of God. In preparation, John summons the people to a baptism of repentance; an outward washing in water symbolizing inward cleansing.

Repentance, from the Greek, metanoia, literally, “a change of mind.” To repent is to turn away from following our human way and will and to return to God’s way and will.

The people, responding to John’s call, come to be baptized. Yet he, again, in a holy hurry, without a scintilla of gentility, says, “You brood of vipers! Who warned you to flee from the wrath to come? Bear fruits worthy of repentance.” 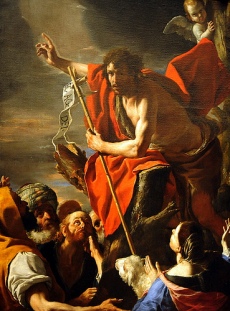 How’s that for a sermon introduction?

This morning, in the spirit of John, in a holy hurry, cutting to the proverbial chase, I outline concisely his message and contemporize it for our time. And, fear not, I do not consider us and, thus, won’t call us a “brood of vipers”!

There are three points.

Point number one. John called “vipers” those who claimed high standing before God and, therefore, were exempt from divine judgment because of their religious heritage as the progeny of Abraham. Not true, declares John. Ancestry alone without faithfulness means nothing. In this, John boldly challenged the accepted understanding of sacred teaching going back generation upon generation about the everlasting covenant God had made with Abraham and his descendants.(1)

So, in our time, to broaden and apply John’s message, there is nothing from a worldly or human point of view that we can claim as signs of our righteousness in God’s sight.

Not our proud familial roots.

Not our valued cultural, ethnic, and racial identities.

Not our academic degrees.

Not our public accomplishments.

Not our private virtues.

Not the respect of our peers.

Not our economic standing.

Not even our submission to Christian baptism, our years of life in the church, and our devotion to religious practices, including our reception of Holy Communion.

Nothing! For if we dare claim one, any, or all of these things as signs of our righteousness before God, then we have fallen prey to the sin of self-righteousness.

Later, Jesus the Messiah, during his ministry, taking up John’s theme, would teach: “No good tree bears bad fruit…The good person out of the good treasure of the heart produces good”(2) and, when explaining to his disciples the Parable of the Sower, “As for (the seed that fell on) good soil, these are the ones who, when they hear the word, hold it fast in an honest and good heart, and bear fruit.”(3)

What is this fruit? In a word, John says ethical behavior.

To all who possess plenty share with those who suffer scarcity.

To tax collectors, do your job honorably, don’t increase the people’s tax bills and skim off the top for yourselves.

So, in our time, nothing has changed about serving those with greater need. Such always has been, always is, and always will be a cardinal ethical virtue. And, as tax collectors and soldiers are agents of the government, clearly, John, in his time, fearlessly directed his prophetic criticism at the mighty Roman Empire. Therefore, in our time and in any time, John’s demand for “fruits worthy of repentance” involves not only individual ethical behavior, but also communal, institutional, systemic morality.

Point number three. John, practicing what he preached, was an ethical actor on the stage of human history. The crowds wondered whether he was the Messiah. Immediately, John, true to his calling, answered not by saying who he was or who he was not, but rather what he did. John, sent by God to herald the coming of the Messiah, always pointed beyond himself to the “one who is more powerful than I.”

Today, I, in a holy hurry, pose one question for us: As individuals and as the community of Epiphany Episcopal Church, Laurens, what are our ethical “fruits worthy of repentance” by which we point always to Jesus?