A homily, based on Luke 1.39-55, preached with the people of the Episcopal Church congregations of All Saints’, Clinton, SC, and Epiphany, Laurens, SC, at a joint Advent season service on Wednesday, December 19, 2018

How oft I have heard, “Politics and religion don’t mix” and “Preachers need to stick to religion and leave politics out of the pulpit.” And I declare to you this night that the Magnificat, Mary’s Song, is a biblical rebuttal.

Now, I think I understand what folk mean when they wish to separate politics and religion. If I define politics as the act of my seeking to manipulate you to support my position and, if you don’t or can’t, then, I, by amassing more votes, run roughshod over you and your point of view and if I define religion as the act of our engaging in spiritual practices and disciplines so to deepen our connection with God in preparation for our lives in eternity, then, yes, I, too, would want to keep them apart.

However in the first century of the Common Era (and, I dare to say, in any era!), politics and religion were inseparable. In the Roman Empire, political leaders held religious office. Caesar was considered to be a divine ruler.

And that same Roman Empire, by the force of might and right, by power and authority earthly and heavenly, occupied and oppressed Palestine and the Jewish people; restricting their liberties, taxing their labors, and, if they rebelled, shedding their blood.

And the Jews, our religious and political forebears, believed that the only way to rid themselves of Roman oppression was for God to intervene, not after their deaths, but in their lifetimes, in the present now of their daily suffering by the coming of Messiah who would bring, who would bear, who would be spiritual relief and physical release by driving the Romans from the land.

This social, religious, and political context is the lens through which to see the meaning of the Magnificat, Mary’s Song.

The angel Gabriel had come to Mary announcing “Do not be afraid…you have found favor with God…you will conceive in your womb and bear a son, and you will name him Jesus. He will be great and…called the Son of the Most High.”(1)

Then Mary, visiting her cousin Elizabeth, hears confirmation of Gabriel’s proclamation, for Elizabeth refers to Mary as “the mother of my Lord.” 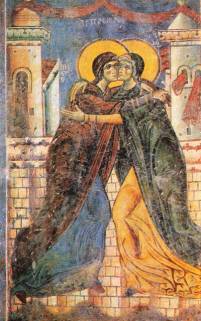 Mary, believing, knowing that she, as theotokos, God-bearer, has a role in bringing about God’s salvation, the divine healing of spirit and flesh, bursts forth in a song of praise: “My soul magnifies the Lord, and my spirit rejoices in God my Savior!”

God who has mercy on the reverent; those who know what, where, and who truest power is…

God who scatters the proud…

God who uproots the powerful…

God who lifts up the lowly…

God who feeds the hungry…

God who banishes the rich.

Rightly understood and righteously sung, Mary’s Song is a subversive protest against the way of this world in which the first remain first and the last, last and in which power, prominence, and prestige are held and wielded in the hands of the few and lorded over the many.

When we rightly understand and righteously sing Mary’s Song, then we know that we, by the Holy Spirit, as Mary, are Christokos, Christ-bearers, that we bear in the wombs of our souls Jesus, that we are to care for the least, the last, and the lost, to comfort the suffering, to console the marginalized.

For this is the living essence of spiritual politics and political spirituality.

Illustration: The Embrace of Elizabeth and the Virgin Mary, an early Eastern Christian fresco of the Visitation, St. George Church, Kurbinovo, Macedonia