In my wonderment and worry about our increasingly fractious culture in which people, in which we all have retreated into a social, political, theological (and every other kind of) tribalism, perceiving and reviling as enemies of all those not in our particular, peculiar tribe, I reimagine the story of the prophet Jonah, a tribalist of the first order, from his viewpoint in the hope that, as he saw, we might see that God, Who created and loves all of us, is always radically a non-tribalist and always radically a universalist.

God spoke to me, “Go to the great city of Nineveh and cry, ‘Repent!’”

“Because, as I declared, I desire that Nineveh repent.”

But I didn’t. And here’s a little (well, it’s about God, so it’s a big) secret. God, Who, as the psalmist says, “fearfully and wonderfully” created us, knows all about us. But God, Who loves us and wants our love given freely in return (here’s the secret!), won’t make us do what we don’t want to do! And I didn’t want to go to Nineveh!

I went in the opposite direction. To Tarshish by ship from Joppa. Now, the psalmist also says, “Where, O God, can I run from your presence?” Nowhere! I didn’t think I could get away with trying to get away. But, again, I also knew God wouldn’t make me do what I didn’t want to do!

I got onboard. We pushed off from the dock. I felt free at last, free at last, thank (well, as I was running away, I honestly couldn’t thank God Almighty, so) my lucky stars, I was free at last!

Then I learned something else about God. I could choose not to do what God wanted, but God would be very persuasive in convincing me to change my mind!

Barely clearing shore, a storm rose. Mighty winds and waves. The swells rising and falling, we feared capsizing! The sailors tossed cargo overboard to lighten the load. I ducked below deck and, mercifully (I was so tired!) immediately fell asleep! But no rest for the weary. The captain woke me, insisting I pray to halt the storm. I bowed my head, half-closed my eyes, and clasped my hands, but before I could utter a word (I wasn’t sure God would answer me anyway!), I saw the sailors casting lots.

I’ve never thought tossing stones from a cup demonstrated anything more than gravity and random order. But some folk, I heard one of the sailors, say, “This will tell us who to blame!”, believe that God’s will is revealed.

One toss! I couldn’t believe it! The lots pointed to me!

“Who are you?” they screamed. “What did you do to cause this storm? Tell us!”

“I’m running,” I tried to think of a convincing story, really, a lie, but there are moments when only the truth works, “well, I’m trying to run away from God.”

The storm grew more furious. The sailors were terrified (me, too!) and angry, gathering around me, shrieking, “What shall we do with you?” I was resigned to my fate. God wasn’t going to let me go. “Toss me into the sea and all will be well.” But they were honorable. Knowing I would drown, they wouldn’t do it. They rowed mightily trying to get back to shore. Their efforts were useless. Who can withstand the power of wind and sea when driven by God’s breath?

Their strength spent, they stopped rowing. They set down their oars and tossed me into the sea. Immediately, the storm ceased, the sea calmed. Doomed, I sank deeper and deeper, then lost consciousness. 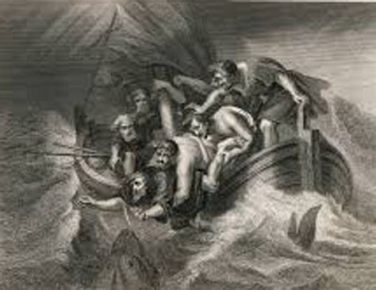 I awoke! Either that or I was dreaming. But in order to dream, I would have to be asleep, and to do that I would have to not be dead. I was in the land of the living! But where?

All was dark and damp. And, phew, it stank! And I felt pressure. Heavy, then light, then heavy again. Like going down into the deep and rising to the surface, then back again. How could that be?

I prayed, “Out of the depths of my distress, I cry, O God! Only You can help! I ran from You. You chased me, casting me into the sea. I thought I would die, but I’m alive, yet in darkness. Deliver me!”

God heard and answered my prayer! Washing up on the shore, I saw a great fish heading out to sea. I was in its belly! Who else but God could do such a thing? Praise God from whom all blessings flow!

Thrilled, I headed home. Then God’s voice. I could’ve cried, but I should’ve known! How could I think God would or could forget anything?

Too tired to argue, much less run again, I went. 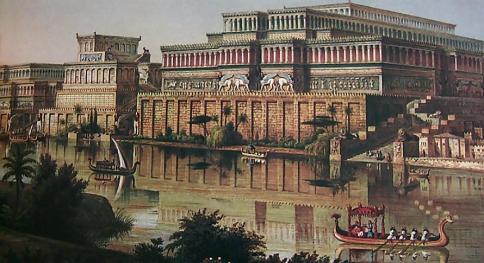 Nineveh was a great city, requiring three days to walk end to end. Once I entered the city limits, I saw that everything I’d heard about the Ninevites wasn’t true. They were people. Just like me! Still, they were foreigners. I was puzzled. Why would God want to save these people?

Even after all I’d been through, I knew God wouldn’t make me do what I didn’t want to do! So, it occurred to me that as God wanted me, even though I didn’t understand it, to preach to these people, I would do it. But I would not go throughout the city. Only a day’s journey. And I would proclaim God’s word, but I would not cry out. Only whisper. So, only a third of these people and only those with good hearing would have a chance to hear God’s word, which, I presumed, they’d reject. Therefore, God, being righteous, would have to destroy them! Ha! 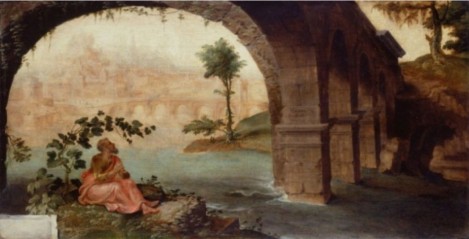 I went outside the city and sat, waiting to see what would happen. Night came. Nothing! Then morning. Nothing! To my surprise, my shock, the Ninevites repented! And God did not destroy them. I was hopping mad!

The sun rose. The wind, hot and dry, blew. Baked in the heat, battered by the wind, and embittered because the Ninevites escaped judgment, I begged God, “Let me die!”

“Alright then, you are mad. Is it because I did not destroy Nineveh?”

“What do You think? You know everything! You tell me!”

“My dear Jonah, you are angry, excuse Me, mad because a people you did not create, a people you really do not know, heard My word and repented?”

“Then, Jonah, I wonder. Do you really know Me?”

2 thoughts on “My Story by Jonah, son of Amittai”