A sermon, based on Luke 9.28-36, which I was to have preached with the people of Epiphany Episcopal Church, Laurens, SC, on the Last Sunday after the Epiphany, March 3, 2019.

However, as happens, on occasion, other words, I pray, Holy Spirit-breathed, were given to me. I would love to post the sermon I did preach, but as none of it was written, all I have to share is what I initially had planned to say.

Jesus took with him Peter and John and James, and went up on the mountain to pray.

I wonder. What did Peter, John, and James expect when Jesus said, “Come with me”?

Perhaps they wanted, needed time alone with Jesus. He had said some disturbing things. About his suffering and dying. About denying themselves. About taking up their cross and following him. About losing their lives for his sake.(1)

Perhaps, not understanding any of it, they would have a chance to bring up their pressing questions, their poignant emotions and to have Jesus clear up their confusion.

Suddenly, his countenance glows, his clothes glisten, and Moses and Elijah appear! 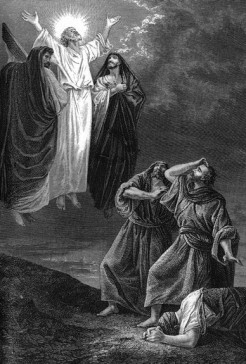 What the heaven is this? An illusion? Physically exhausted from their climb, gasping for breath, hyperventilating in the thinner mountaintop air, do Peter, John, and James see something that isn’t there?

No. What they see is real. So real, they can’t comprehend how real.

Of all that we could say about the transfiguration of Jesus, to bring it from the mountain height to the plane of the world where we live, I suggest that it is a metaphor for our human experience. A metaphor for how life is meant to be. A metaphor for life as it really is in the face of all we call “reality.”

Two examples among many…

A moment in a relationship. Two people, years ago, made a commitment to each other. Now, years later, they – having lived through manifold cycles of uncertainty and clarity, expectations broken and needs met, disappointment and reconciliation, doubt and discovery, in other words, having lived life honestly, nakedly, deeply, fully – have come to a place of deepest love and greatest respect.

There is a mountaintop moment of transfiguration where they see their relationship, in becoming what it was meant to be, as it really is: A safe, sanctified space to live life’s paradox; that only through the other can each become one’s fullest self.

A moment in a job. One, having worked long and hard, discovers a calling, a vocation where one’s deepest desires and greatest gifts address a need in the world.(3)

There is a mountaintop moment of transfiguration where one beholds what was meant to be becoming what is, life and labor joined as bone and marrow, soul and spirit; distinct, yet so related as to be indistinguishable.

Or maybe they do.

Peter, John, and James “kept silent and in those days” of Jesus’ ministry, “(telling) no one of any of the things they had seen.” Nevertheless, immediately thereafter they and Jesus came down, returning to the plain. A man, pleading that his ailing son be made whole, approached Jesus, who healed the boy.

The transfiguration of the mountaintop, where and when we see life as it is meant to be, is to be repeated, replayed in life lived on the daily plane of our human existence. Wherever, whenever you and I, through word and deed, transform enmity into love, discord into harmony, despair into hope, disappointment into forgiveness, sorrow into joy, there is a transfiguration moment when we play our part in making what is meant to be that which really is.

5 thoughts on “Seeing things as they really are”