People were bringing little children to him in order that he might touch them; and the disciples spoke sternly to them. But when Jesus saw this, he was indignant and said to them, “Let the little children come to me; do not stop them; for it is to such as these that the kingdom of God belongs. Truly I tell you, whoever does not receive the kingdom of God as a little child will never enter it.” And he took them up in his arms, laid his hands on them, and blessed them (Mark 10.13-16) 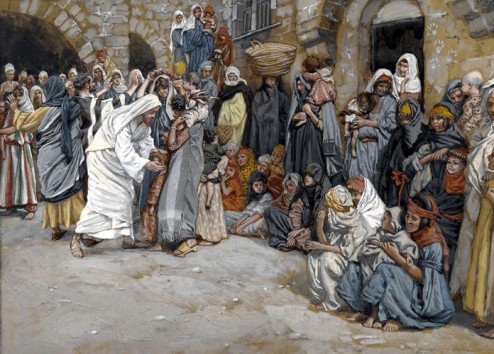 From times long ago and places far away, two vignettes of Sunday morning moments at the Communion rail…

He knelt and bowed his head, his arms folded across his chest; the long-practiced sign of one bidding a blessing. At the end of the worship service, he lingered. When all had departed, he approached. “Paul, you may have wondered why I didn’t receive Communion.” I nodded, though knowing I never would have initiated an inquiry into such a deeply personal matter. “I don’t feel worthy.” That past week, he said, “I made some terrible decisions and I can’t forgive myself.” I offered to pray with him. We joined hands. And, after a time, standing in silence, I prayed the Holy Spirit to grant him peace.

She, six years of age, preceding her parents, came, knelt, and looked up; her eyes agleam, her countenance beaming, her hands, palms open, raised in anticipation. “The body of Christ, the bread of heaven.” I placed the wafer in her hands, which she, as if famished, swiftly consumed. And then, her voice pitched high in unbridled glee, she said, her words melodic, almost like singing, “Thank you, God!”

What is it about children and the kingdom of God?

Aye, the kingdom of God:
that gift of God’s presence, come from above,
that, as gift, e’er-desired and ne’er-deserved,
freely poured out from the measureless largesse of Divinest Love.

What is it about children and their relation to God
that Jesus would teach: “To each such as these the kingdom belongs”?

Is it the energy,
the simplicity,
or the vulnerability
(or more, tho’ at least, these three!)
of their acceptance of gift as gift?

For this Jesus-saying about children,
by contrast,
is fast-followed by his encounter with one who desired
to earn the kingdom through means of his own design:
“Good Teacher, what must I do to inherit eternal life?”(1)

Jesus, trusting the sincerity of the man’s inquiry,
and loving the man,
and knowing that he, rich with the storehouse of worldly pleasures,
had no hallowed hand,
hollowed and hungry to be filled with the gift that he had said he sought,
counseled renunciation of his earthly treasures,
which, sorrowfully, he could not, for he would not. 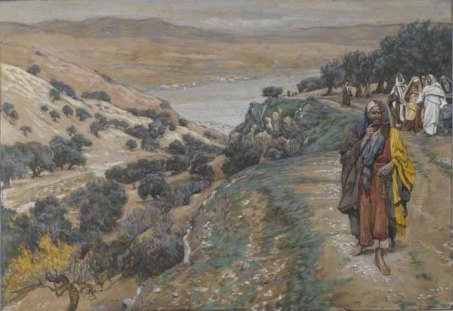 Nay, with adults;
we who strive to prepare, and then thrive on our plans
“Caution” (aka “Prudence”) our motto.

Jesus, alway advocating radical, personal revolution,
is a Messenger with a message e’er easier for children to hear
and to receive
and to believe.

Illustrations:
Suffer the Little Children to Come unto Me, James Tissot (1836-1902)
The Rich Young Man Went Away Sorrowful, James Tissot