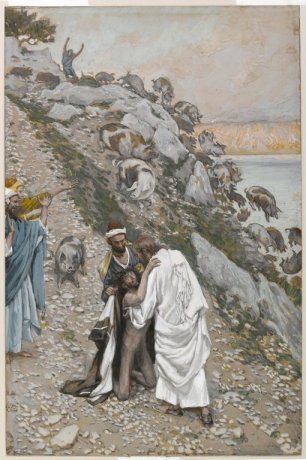 In the country of the Gerasenes…Jesus met a man possessed by demons. He was naked and (lived) in the tombs…He was kept under guard and bound with chains and shackles, but he would break the bonds and be driven by the demons into the wilds. Jesus asked him, “What is your name?” He said, “Legion,” for many demons had entered him…On the hillside (there was) a large herd of swine. The demons begged Jesus to let them enter these. He gave them permission. The demons came out of the man and entered the swine, and the herd rushed down the steep bank into the lake and was drowned. The swineherds, seeing what had happened, ran off and told it in the city and country. The people came out to see what had happened, and…they found the man from whom the demons had gone sitting at the feet of Jesus, clothed and in his right mind. And they were afraid (Luke 8.26a, 27, 29b-30, 32-35, abridged)

I strive to read scripture with an unvarnished eye or, to put this another way, I try not to read the humanity out of the scripture. For the stories, whether they happened as actual events in history, portray human beliefs and behaviors. Hence, one way I have learned to reflect on scripture (and this is yet another way of saying what I’ve already said!) is to read myself into the story, asking myself the question: What would I be feeling, thinking, doing if I had been there?

When I read and reflect on the story of Jesus healing the Gerasene demoniac, I wonder. When the townsfolk saw the man who had been demon-possessed “clothed and in his right mind,” why were they afraid? More to the, my point: Why would I have been afraid?

In the light of my personal preferences and in the shadow of my prejudices, I perceive that you, in your beliefs and behaviors, even in your appearance, are someone, something “other” than I. Different, too different from me.

And then, I characterize, demonize you as unacceptable and to be avoided.

And then, say, you do something unexpected. Something that I, in the blindness of my arrogant judgment, wouldn’t, couldn’t expect someone like you to do!

And then, I see you as “clothed and right-minded,” which is another way of saying that I see you, as you always have been, as human; one like me.

And then, if I am honest, I am called, challenged, confronted by the inner, inherent demand of my conscience to treat you differently. To treat you as I would want to be treated. To treat you, as Jesus taught, to love you, my neighbor, as myself.

And then, I must confess to God and to you that I was wrong…that I am wrong.

And then, I must ask, beg for forgiveness, first, from you, and only then from God.