This morning, I awoke with this thought.

But, first, following the trail back to the sources of the idea (as best as I can discern), I digress…

During my college years, I majored in political science. Immediately before and since then, I’ve had a temperament attuned to all things political.(1)

Moreover, largely as the fruit of my formative years’ familial nurturance, I have an inbred hunger for history. Searching and understanding the chronicles of the past, for me, illumines the present and, given what I discern as the inherently cyclical nature of history, hints at the future.

Still more, love and justice, generosity and impartiality for all people at all times, are my chiefest values.(2) I consciously seek to express love and justice in my behavior, in the main, in being open to listening to and understanding (not necessarily agreeing with, but accepting) people, even and especially “the other,” those who think and feel differently than I.

Through this trifocal-lens of politics, history, and personal values, I behold life – and, in the words of the prayer, “live and move and have my being” – in the world.

These days in America, politically, constitute a hyper-chaotic time. The presidency of Donald Trump and its form of conservatism(3) and the attendant energetic oppositional reaction, largely by Democrats, has roiled the waters of national life as I can recall of few other previous administrations in my lifetime.(4)

As I listen to the daily drumbeat of political invective, depending on folks’ beliefs and in which or whose base of support they stand, I’ve heard – and, as I strive to listen, from all sides – every disparaging word about “the other,” among them, “awful,” “bad,” “dangerous,” “ruinous,” “terrible,” “tragic,” (and more), and then beyond to include “evil” and “Satanic.”

This morning, I awoke with this thought, which, in the proverbial and literal light of day, has crystallized.

As a political, historical, love-and-justice guy: Unless and until I am able to look at those I consider “the (my) other” and – without denying my beliefs or discarding my commitments – see them on the side of the angels, then I neither will nor can understand their values and viewpoints, and their loyalties.

And such understanding, for me, is essential. For they – “the other,” all the others who hold values and viewpoints other than mine own – after all, are my fellow citizens, and, even more, fellow human beings; each and all with God-given dignity. 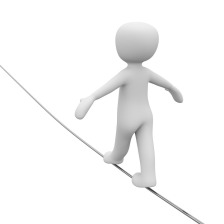 Speaking always and only for myself, this balancing-act is my calling in these tumultuous times.

Footnotes:
(1) In a footnote of a previous blog post (My Political Opinion, June 28, 2019), always believing, for purposes of understanding, in the necessity of defining my terms, I wrote: “By ‘political,’ here, I do not mean the act and art of the commerce of human relations, which, I believe, is the broadest, truest sense of the term. Rather, more narrowly, I mean the activities and structures, positions and persons associated with the exercise of governance.”
(2) As I wrote, also in a previous blog post (Being Blessed: Mid-Summer Meditations on the Beatitudes, 9 of 10, July 19, 2019): “The more I read and reflected on the Jesus-story as presented in the biblical gospel accounts, Matthew, Mark, Luke, and John, the more I identified Jesus as the incarnation or embodiment of love and justice; unconditional and willful (that is, active) generosity and impartiality for and with all people at all times. As a follower of Jesus, I claim love and justice as my chiefest values, which I, too, seek in my living (my thinking and feeling, intending and acting) to offer to others.”
(3) By “its form of conservatism,” I mean no disrespect. Rather, I infer that Mr. Trump is not a conventional conservative. Political conservatism, as a philosophy, historically, has been distinguished by the principles of individual liberty, small government, low taxes, and fiscal responsibility. I consider Mr. Trump a less-natively-ideological populist and one not fundamentally given to following tradition, who, nevertheless, appeals to conservatives via his nationalism, tax cuts, deregulation, and appointment of originalist (i.e., interpreting the Constitution through the lens of the original intent of its framers) judges.
(4) The “few” other presidencies during which I can recall national, if not also international turbulence (though, in each case, for different reasons than the current time), are John F. Kennedy (1961-1963) due to his assassination, Lyndon B. Johnson (1963-1969) due to the Vietnam War, and Richard M. Nixon (1969-1974) due to the Watergate conspiracy and his subsequent resignation from office.
(5) Thomas Paine (1737-1809), the English-born American political activist, theorist, and revolutionary, wrote the 16-pamphlet series, The American Crisis, signed with the pseudonym, “Common Sense,” seeking to provide a rational framework for the Revolution War against the British crown and to bolster the resolve of the American colonists for the coming and, once engaged, ongoing fight.