They walked along the road that ran by the grandfather’s countryside home.

Their outing almost didn’t happen. The grandfather was tired. Not so much from physical fatigue. He was (and had been for quite a while) simply, deeply, down in his bones tired of life. Everything – thinking, feeling, breathing – required effort. He rather would have stayed in the house; his self-imposed prison (but, at least, it, every square foot, every dust-ridden timber, every darkened, cob-webbed corner, was familiar). He had exiled himself from life. He hated the thought, but not nearly as much as he loathed (yet long had he accepted, though ne’er uttering aloud, e’en to himself) the idea, the fact that he was hopelessly useless.

“No, grandson,” slumped in his tattered lounger, his arms hanging listlessly over the sides, the very notion of the maneuver of putting one foot in front of the other, and then repeating it manifold times wearied him, “not today. I don’t quite feel up to it.”

(Truly, he wanted to say, “Not ever!” but the potential of crushing his grandson’s hopes weighed more heavily on his soul than his ennui. Even more, he knew the boy had plenty of time ahead of him to discover what he, in his almost eighty years, had learned: Life disappoints more than it delights. Still more, he loved the boy – the only child of his daughter, and she his only child – who, now, six, had been born long after he had relinquished his hope of hearing the almost forgotten sound of the mirth of youth.)

Slowly turning his head, he looked into the eyes of his grandson. There, he beheld great expectation, which, surprisingly to him, provoked a spark of energy; enough for him to marvel that something as mundane, as meaningless as a walk on a dusty country road when viewed through the eyes of a child was filled with wonder.

“Okay, grandson,” he nodded, wincing at the now accustomed ache in his neck, “okay.”

Through the door, they went. The heavens were overcast; the ashen firmament matching in color the invisible, but no less manifest mantle of languor that enveloped his soul. It was chilly. A brisk wind – and where woods used to be, now, only barren fields, so, with nothing to halt its assault on exposed flesh – making it feel colder than it was. It had been a mistake to go for a walk. But the boy seemed happy, his bright, beaming countenance a challenge to the surrounding gloom.

“Pull your cap down snug, grandson.”

On they walked, nary a word passing between them; the grandfather saving his breath for breathing. Around the bend, on yet another in a series of plots of cleared land, right at the road’s edge, there stood a solitary oak tree. Gnarly and barren of leaves, against the gray backdrop, it appeared skeletal. 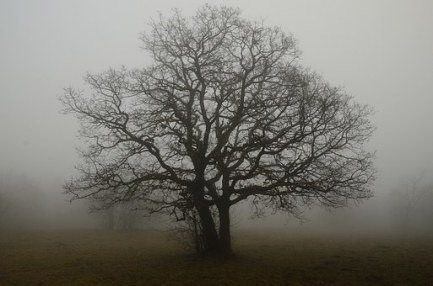 The boy stopped, staring, fixated on that tree, which appeared to him as a natural portrait of – what years later, he would term – “a lonely nobility.”

“What are you looking at, grandson?”

With a sprightly finger, pointing, “The tree, Grandpa.”

“There used to be other trees around it, right, Grandpa?”

“That’s right. The other trees, all of them, were cut down.”

“For wood for all kinds of things. Homes and furniture, mostly, I reckon.”

“I can’t rightly say. Must’ve been something wrong with it to be considered…uh…useless.” The word caught in his throat. Reflexively, painfully, his shoulders slumped. From his deepest recesses, he had spoken his truth, giving air to his own unsparing, sorrowing self-judgment.

“But, Grandpa,” the boy tugged at the older man’s coat sleeve, “that tree’s not useless.”

“It’s been left to give shade from the sun. And that’s what you do. You protect me.”

An instant sympathizing tear – for his grandson and for himself – welled at the corner of his eye and, relishing the feel of feeling, not wiping it away, rolled down his cheek.

“Are you alright, Grandpa?”

“Yes, my dear grandson. Thanks to you, I’m finally alright.”

He wasn’t quite sure what his grandfather meant, but, as the older man’s wrinkled smile banished his concern, he, in happy, wordless reply, grinned.

Later that night, his grandson having returned to the city, he sat in his tattered chair. He reached for his Bible. For years, farther back than he could remember, every evening, his fingers ambling over its scritta-paper pages, the gilt edges long worn away, his eyes feasted and his soul was nourished by the Word of God. But, lately, he confessed to himself, “too-long-lately” his daily reading and reflecting had been a casualty of his despair.

He turned to the Book of Psalms. Led to one of his favorite biblical songs, he read aloud:

“O Lord, our Lord,
how excellent is Thy name in all the earth!
Who hast set Thy glory above the heavens.

“Out of the mouth of babes and sucklings
hast Thou ordained strength because of thine enemies,
that Thou mightest still the enemy and the avenger.

“When I consider Thy heavens, the work of Thy fingers,
the moon and the stars, which Thou hast ordained;
what is man, that Thou art mindful of him?
and the son of man, that Thou visitest him?”

Awestruck, his mouth fell open. Never, before that sacred moment of revelation on the road, had it occurred to him that he, in his misery, denying the dignity of his God-given creation, had been an enemy, his own and of God. 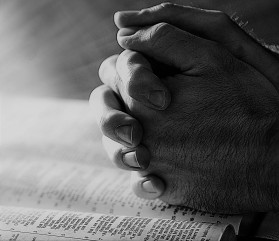 The opened Bible in his lap became a prie-dieu on which he lay his clasped hands; a prelude to his prayerful cry:

“I thank Thee, Lord, for Thy word of wisdom that Thou hast brought forth from the mouth of my grandson. That Thou, thus, would be mindful of this sorrowful man, caring for this woeful son of man, I praise Thee with all that I am and all that I have. ‘O Lord, my Lord, how excellent is Thy name in all the earth!’”

2 thoughts on “A Child’s Aged Wisdom – A Modern Parable”