A first century dinner had a definite seating pattern. Everyone knew it. The host at the center of the table with the honored guests nearest the host. 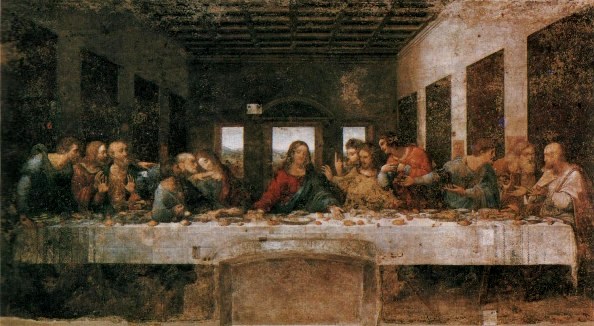 which is the basis of our reredos wood carving over our altar. 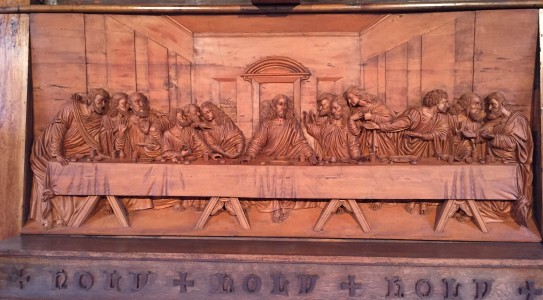 Dining at the home of “a leader of the Pharisees,” Jesus watches others scrambling for “the places of honor.” Taking note of this egotistical grasp for prestige, he offers this observation: “When you are invited by someone to a wedding banquet, do not sit down at the place of honor, in case someone more distinguished than you has been invited by your host.”(1)

If I’d been there, I would’ve been more direct: Modesty always is the best policy, for the face you save may be your own!

But Jesus is not offering instructions on civilized conduct, even less the essentials of etiquette. For though the occasion is a Sabbath meal, a weekly, common event, he speaks of “a wedding banquet;” a symbol of eternal life, God’s life. Therefore, Jesus’ parable is about proper behavior in God’s presence or the character of life in the kingdom of God. That behavior, that character is humility. “For all who exalt themselves will be humbled, and those who humble themselves will be exalted.”

In Jesus’ day, I’m not sure that people believed the exalted would be humbled and the humbled would be exalted. I am sure that most people today don’t believe it! As proof, I look at Washington’s ongoing partisan squabbling over the possession of power; the currency in the marketplace of politics. Those who have it fight to stay exalted and those without it, hunger to be exalted. And, regarding financial wealth, I don’t know many a humbled materially poor soul who doesn’t have it who doesn’t want it or one of the exalted rich who desires to be rid of it.

However, humility, in the mind and from the mouth of Jesus, has little to do with politics and economics and even less with that still commonplace idea of our devaluing ourselves by naming and claiming only our weaknesses. That is self-pity, which is inherently dishonest. For none of us, even at our worst, is entirely flawed. Or, as a wise soul has said it: “None of us is always as bad as the worst of ourselves.”(2) Humility, rather, involves an authentic evaluation of ourselves that affirms our abilities and admits our insufficiencies, which is the clearest lens through which we can see our constant dependency on God.

As an outgrowth of this humility and dependency, Jesus then utters an utterly counter-cultural word about earthly banquets. Speaking directly to the host, the one in charge, Jesus overturns all the quid pro quo rules of the game about worldly reciprocity: I do for you, then you do for me. Jesus says, “Don’t invite those who can and will repay you. Invite those who can’t. The poor, the lame, the blind. Then you will be repaid at the resurrection of the righteous.” 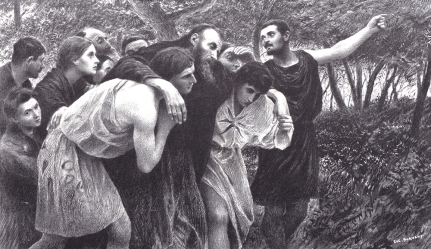 Now, if we take this too literally, we turn God into a Divine Calculator who tallies our good deeds and repays us accordingly at the end of time. The risk is that we, who, in our humanness, cannot free our hands and hearts from the desire for reward, design God in our image. The greater risk is that we believe in our design that this is how God is.

And that, in this life, is for us to do…

Recently, via social media, I came across a quote that arrested my attention. Generally, I view pithy sayings, precisely because of their brevity, as missing the mark of engaging the complexity of a given issue and, therefore, falling short of being taken seriously. However, in this case, I will modify the quote, giving it voice to my view of life, of me…

At the end of my days, when my life’s record is in hands of the judgments of the worldly and institutional powers that be and that of public opinion, may my gravestone epitaph read: Concerning the registers of the honored and the rolls of the favored, I rather would be excluded for whom I included than included for whom I excluded.(3)
Footnotes:
(1) Jesus’ observation is akin to a proverbial saying (Proverbs 25.6-7), which he, undoubtedly, knew:
Do not put yourself forward in the king’s presence
or stand in the place of the great;
for it is better to be told, “Come up here”
than to be put lower in the presence of a noble.
(2) Of course, the converse also is true: None of us is always as good as the best of ourselves!
(3) The exact quote: “At the end of the day, I’d rather be excluded for who I included than included for who I excluded.” The Reverend Eston Williams, pastor, Aley United Methodist Church, Seven Points, Texas (c. 2016), in reference to same-sex relationships and marriage.

Parable of the Great Banquet (detail), Eugène Burnand (1850-1921). Note: I love Burnand’s painting, for its depiction of the procession to the feast of “the poor, the crippled, the lame, and the blind” envisions that Jesus’ instruction about who are to be the guests at the next “luncheon or dinner” has been heard and followed!

3 thoughts on “An Invitation to Inclusion”