Jesus tells a parable of two who prayed. 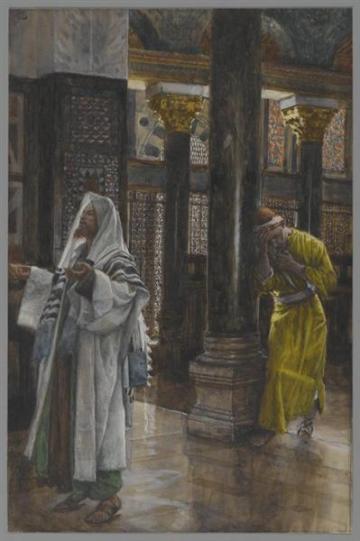 Historically, in the public’s perception, Pharisees haven’t fared well. “Pharisaical” has become a synonym for the hypocrisy of outwardly doing of all the right things, but inwardly being less than true to the values that the actions symbolize. Indeed, Jesus condemned those Pharisees who were legalistically obsessed with externals; more concerned about correct conduct than love or justice.(1)

Nevertheless, the Pharisees’ “job” in Judaism was important. They were to know God’s Law; all 613 ritual regulations of Sabbath observances and feast days, dietary rules and tithing. Keeping, doing God’s Law, they were to be embodiments, outward and visible living symbols of the heart of the Law: love for God and love for neighbor.

The second actor in Jesus’ two-person drama was a tax collector. A despised collaborator with the hated Roman Empire who took money from his own people on behalf of the enemy; often levying higher amounts than were owed and pocketing the difference. So, it was when tax collectors, seeking to repent, came to John the Baptizer, asking, “What should we do?” John, clearly aware of the standard operating procedure of tax-collecting, said, “Collect no more than is due!”(2)

These “two…went up to the temple to pray.”

The Pharisee, considering himself morally superior to the tax collector, prayed, truly, sang a hymn of self-praise. And truth is he hadn’t lied. He had done everything right. But he hadn’t lived the Law, for he hadn’t loved.(3)

The tax collector prayed, truly, confessed. For he had gotten nothing right, but everything real. For he hadn’t fallen prey to the temptation of comparison. The tax collector, judging himself only by himself, found himself lacking, compelling his cry for mercy.

Jesus was an intuitive storyteller. He taught in parables because he wanted us to think for ourselves. And he ended his story with the tax collector’s plea: “God, be merciful to me, a sinner!” Luke, writing a generation after Jesus, wanting to point us in the right direction, making sure we arrive at the right conclusion, added his own ending, “I tell you, this man went down to his home justified rather than the other,” and this moral, “for all who exalt themselves will be humbled, but all who humble themselves will be exalted.”

So, starting where Jesus stopped, I suggest that a Pharisee and a tax collector abides within each of us.

Like the Pharisee, we, at times, compare ourselves with others. The risk is that our self-perception and esteem can rise when we deem others lesser than ourselves and fall when they are greater! And, like the Pharisee, and on the positive side of things, we are not like other people. Each of us is unique. Therefore, there always is something each of us can give to others and receive from others.

Like the tax collector, we earn much of our profit, our material treasure and the wealth of our personalities from and through others. Should we, when we forget that, we risk believing that we did it ourselves; whatever “it” is – our abilities and achievements, life itself. Therefore, there always is a reason for our gratitude and for our need of mercy.

So, whene’er we go up to the temple, which is a metaphor for prayer, may we, with our inner Pharisee and tax collector, always walk hand-in-hand.

Footnotes:
(1) See Matthew 23.1-36 and Luke 11.42-44.
(2) Luke 3.12-13
(3) This Pharisee, for me, fulfills Paul’s sad commentary on a loveless life; blessed with ability and achievement, but lacking compassion for others: “If I speak in the tongues of mortals and angels…if I have prophetic powers…understand all mysteries and all knowledge…and faith…but do not have love, I am nothing” (1 Corinthians 13.1, 2, my emphasis)

2 thoughts on “Going Up to the Temple to Pray”