Based on the biblical Exodus-story, Numbers 12, 20.1, and Micah 6.4, a fictive recollection in poetic form by the older sister of Moses and Aaron.

‘Twas a pharaoh who arose.
Joseph, he knew not.
Fearing the Israelites spreading o’er the land,
he bound my people in chains.
And when slavery’s rigors did not decimate our numbers,
this king o’er Egypt-land decreed all Israelite baby boys be slain.

My mother, Jochebed, to my brother gave birth
and, that she might him spare,
him she hid from all sight.
Yet, day by day, his discovery, sure to come to light,
thus, his destiny of death assured,
she him lay in a basket afloat on the river,
sending me, Miriam,
meaning “star of the sea”
(surely, a portent of things to come!)
to oversee what might become of my baby brother. 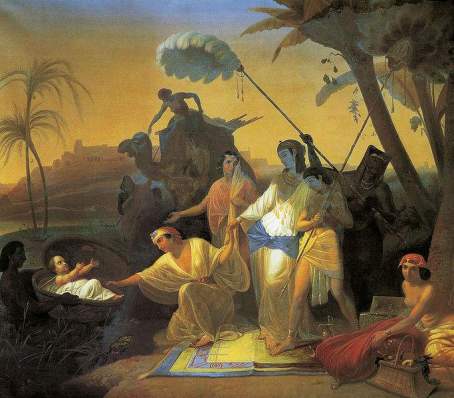 A daughter of pharaoh, coming to bathe,
saw the basket, aloud crying, “A child of the Hebrews!”
From the bush, forth I burst, asking, pleading,
“Shall I find a woman of the Hebrews, the child to nurse?”
“Aye,” said she, “of course!”
Thus, swiftly I flew to call none other than the baby’s (my) mother;
who cared for her son, my brother,
teaching him the lore of our people,
‘til he of age was claimed by pharoah’s daughter,
calling him “Moses” for said she, “I drew him out of the water.” 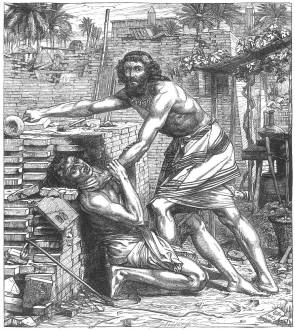 with mighty lifted hand, an Egyptian he slew
who was beating a Hebrew slave, then

flew to Midian
(at his departure, my heart broken,
but better that than pharaoh take his life) then

once there, in defense of some women,
against angry shepherds,
who sought water from the well to draw,
by divine providence, he met Reuel,
who gave a daughter, Zipporah, to be his wife, then 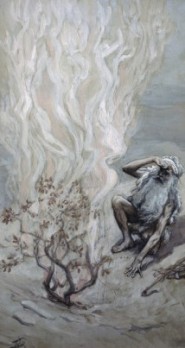 at the bush, ablaze, yet not burned
God, the covenant with Abraham, Isaac, and Jacob, remembering,
called, “Moses, Moses, I see my people’s misery
and, to a land of milk and honey,
I AM who I AM, through you, deliver them
by mighty words and wonders!
Now, go ye down Moses,
way down in Egypt-land,
tell ol’ pharaoh, ‘Let My people go!’”

My brother returned
and my heart, rejoicing, too, as on fire, burned
my desire with him and Aaron, our brother,
to fulfill God’s will.

‘Twas, as God saith,
through many mighty words and wonders,
after several tests and severer trials,
finally, by God’s avenging angel, passing over,
all the Egyptian first-born in all the land dying
pharaoh, no longer able to bear the cost of denial of God’s power,
relenting, let us go.

But then, with hardened heart and changed mind,
pharaoh stridently opined:
“What good hath we done freeing Israel from slavery?
Let us go and steal them back into our captivity!”

Thundering came pharaoh pursuing,
with horse, chariot, and vast army;
the Israelites, at the edge of the sea, tarrying, terroring,
anguished and angry, crying to Moses of his error gravest,
“Thou hast brought us up from Egypt to perish!”
And Moses declaring,
“Fearest not and standeth still,
behold the might of God’s justice shall bring us deliverance!”
stretching out his hand, dividing, turning the sea into dry land,
allowing bands of Israelites to pass over
and then the waters, returning to their resting place,
drowning our rampaging pursuers 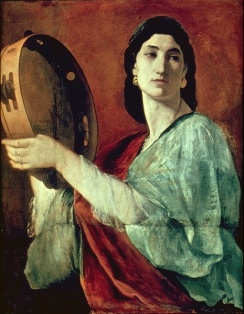 Moses and the Israelites, in gratitude to God,
sang the lyric victory chant, the Song of the Sea,
yet, as this hymn victorious,
through the Spirit, first was plucked on the strings of mine heart,
the words, by the Spirit, the fruit of mine mind,
I, with tambourine in hand led the band of all the women
(for we would ne’er be silenced by the men)
to dance and to sing:
“To the Lord God, all honor and praise be
for triumphing gloriously,
throwing horse and rider into the sea!”

But then, sometime later,
I chafed against the authority of my brother;
so, too, Aaron.
For in Moses’ face lodged a challenge, we together:
“Has the Lord spoken only through you?
Has he not spoken through us, too?”

(And, surely, I,
of all of scripture’s women of promise,
the first to be called “prophet.”) 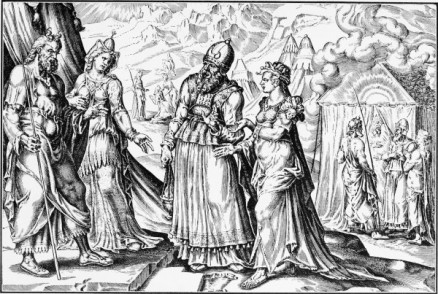 God, hearing our lamenting cry,
called us three to the tent of meeting;
and, there, making clear the superiority of Moses’ call;
he, God’s servant, the greatest of all.

And God, wroth at our impudence
to question Moses, thus, too, God’s choice,
punished…

only me with leprosy!

Aaron, before Moses, pleaded for me
and Moses, before God, prayed for me
and God
(or was it a later male writer who,
editing this portion of the story,
despising e’en the thought of a woman-leader
and, surely, one, as I, so assertive!),
from the people, exiled me,
then, after the seventh day, to the people, restored me
beyond which no more was to be heard from me
unto my dying day.

My Postscript: A half millennia later, the prophet Micah, testifying in God’s Name, and, in reminding a wayward Israel of the richness of God’s grace, remembered Aaron and me, saying:

“I brought you up from Egypt-land,
And, by my hand, redeemed you from slavery’s band;
sending before you Moses, Aaron, and Miriam.”

I, Miriam, thank you, Micah!

2 thoughts on “I, Miriam: My HerStory”