A sermon, based on 1 Corinthians 1.10-18, preached with the people of Epiphany Episcopal Church, Laurens, SC, on the 3rd Sunday after the Epiphany, January 26, 2020.

“It has been reported to me by Chloe’s people that there are quarrels among you, my brothers and sisters.” 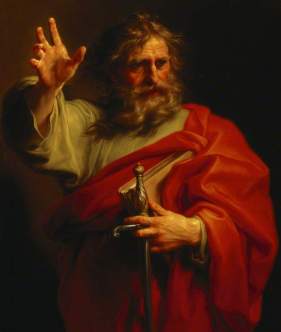 Paul is on the road, proclaiming the gospel of Jesus Christ, establishing churches throughout the Mediterranean world. He receives disturbing news from Chloe’s people that rival groups have disrupted the unity of the Christian community in Corinth; a church Paul had founded during an earlier missionary journey.

(Who was Chloe? I don’t know. The Bible bears only this one mention of her. Nevertheless, Chloe, remembered by name, must have been someone well-known and, identified as having “people,” she must have been well-respected, which makes a strong case for the presence of women in church leadership from the earliest of Christendom’s days!)

Now, unity does not mean unanimity of outlook and opinion. When Paul calls everyone “(to) be in agreement (with) no divisions, united in the same mind and purpose,” he means that all share a heartfelt care, a soul-deep concern for the health of the body, the whole. So, one’s point of view or favorite activity, as significant and self-defining as personal preferences are, would not, could not be the reason for one’s participation in the life of the community. So, there would be no dividing lines of allegiance to individual leaders or teachers and, by extension, to particular perspectives or interests. (Although I confess an egoistic attraction to the sentiments of those who declared, “I belong to Paul”!)

Such division, deeper than intellectual disagreement or emotional discord, is a spiritual dis-ease, a psychic illness; leading Paul to cry out in rhetorical anguish, “Has Christ been divided!”

To contemporize Paul’s teaching, for two millennia unto this day, countless have been the conflicts in congregations. (If any of us ever thought that conflicts in Christian congregations didn’t occur in the early church era and only happened later, clearly, that wasn’t the case. Ever! Conflicts happened and happen because churches were and are populated by people. Indeed, if there hadn’t been conflicts, a good portion of the New Testament, seeking to address such matters, wouldn’t have been written!)

And to personalize Paul’s teaching, so, too, in the history of Epiphany, Laurens. Though before my time, I’ve heard stories from some of you here today. In risking stirring your memories of those painful periods, I neither criticize nor judge anyone. Rather, in the blazing light of Paul’s insight, I reiterate what we already know, consciously and intuitively, based on human experience, our own and that of others.

Life in community – institutional and organizational, whether religious bodies, work settings, or social groups and personal, concerning our families, friends, and our most intimate one-to-one relationships – involves a tension between communal aspirations and individual ambitions. A tension inherent and constant. Thus, when (not if) our individual interests and our communal commitments collide, disagreement is inevitable. And when that happens, it is imperative that we, with Paul, reaffirm the values of common care and concern by which we refuse to allow differences to divide.

Looking beyond our personal lives to America, our national fabric is riven by division; cultural, political, racial, and spiritual. Division manifested in partisan allegiances that admit, allow little opportunity to see anything other than one way or our way (whatever the “one” and whoever the “our” is). Great is the danger of disintegration to the point, aye, I sometimes fear, past the point where we, as a nation, are unable to grapple with common concerns that affect us all; among a long list, at least, as I see it: climate change and dwindling natural resources, the increasing gap between rich and poor, global and domestic violence, access to medical care.

In the light, in the shadow of these times, I ask: Where are Chloe and her people?

Those whose love of the whole is so intense that they dare speak and act prophetically whenever they believe that the life of the community – whether church, synagogue, or mosque, family, neighborhood, or nation – is endangered…

Those who, in the face of division, would march into hell and move heaven and earth striving to make things right…

Those who, in doing their faithful duty for the sake of community, are themselves epiphanies, revelations of God’s Light; shining, dispelling the darkness of division. Those, therefore, who, as saints of God, let us pray:

…lived not only in ages past;
(but number in the) hundreds of thousands still;
(that) the world (will be) bright with the joyous saints
who love to do Jesus’ will.
(We) can meet them in school or in lanes or at sea,
in church or in trains or in shops or at tea
(or in Congress, maybe!);
for the saints of God are just folk like (you and) me,
and (let us pray that we) mean to be (like Chloe and her people) too.

Endnote: The lyrics, from the hymn, I sing a song of the saints of God; words by Lesbia Scott (1898-1986), my parenthetical emendations.

The Apostle Paul, Pompeo Girolamo Batoni (1708-1787). Note: Batoni portrays Paul, as oft he appears in art, bearing a book, symbolic of the Apostle’s New Testament epistles, in the Latin, spiritus gladius, the sword of the Spirit (according Ephesians 6.17, “the word of God”), representative of Paul’s proclaiming of the gospel of Jesus Christ throughout the first century Gentile world.