Prologue: The temper of the times, nationally and globally, politically and personally, is wroth. Division and anger reign. I do not stand apart, casting my judging eye on all ‘round about me. For I, as opinionated and, I confess, as grudge-bearing as (and, depending on the subject, perhaps more than) the next person, bear in my body, my belly the prevailing tensions of these days. As a Christian, I am called to contemplate that cardinal, necessary act, indeed, art of all human relating: Forgiveness. 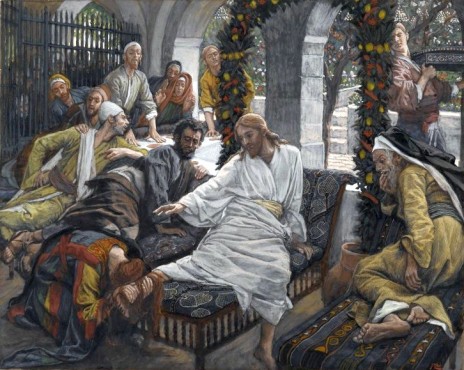 A Pharisee, named Simon, asked Jesus to dine with him. A woman, a sinner, learning that Jesus was at the Pharisee’s house, brought an alabaster jar of ointment. She stood at his feet, weeping, bathing his feet with her tears and drying them with her hair. She continued kissing his feet and anointing them with the ointment.

Simon said to himself, “If this man were a prophet, he would have known who and what kind of woman, a sinner, this is who is touching him.”

Jesus said, “Simon, I have something to say to you.”
“Teacher, speak.”
“A certain creditor had two debtors. One owed five hundred denarii. The other, fifty. When they could not pay, he cancelled the debts for both. Which will love him more?”
“The one for whom he cancelled the greater debt.”
“You have judged rightly.”

Jesus turned towards the woman. “Simon, do you see her? I entered your house. You gave me no water for my feet, but she has bathed my feet with her tears and dried them with her hair. You gave me no kiss, but from the time I came in she has not stopped kissing my feet. You did not anoint my head with oil, but she has anointed my feet with ointment. Therefore, I tell you, her sins have been forgiven. Hence, she has shown great love. But the one to whom little is forgiven, loves little.”

Jesus said to her, “Your sins are forgiven.”

Those who were at the table with him said among themselves, “Who is this who forgives sins?”

Jesus said to her, “Your faith has saved you. Go in peace.”

Here, a dialogical drama, which, if…when I remember to internalize it, guides me to externalize the forgiveness I have received, sharing it with others. All others.

Simon the Pharisee represents my inner critical parent. The part of me that, repeatedly rehearsing the rules and regulations, the condemnatory “thou shalt nots” and the commendatory “thou shalts,” gives voice to that impossibly rigid, utterly unattainable standard of worth imparted unto me long ago. The part of me that speaks sternly and uncompromisingly to me when I disappoint myself and to others when they disappoint me.

Jesus. The merciful part of me. The part of me that has borne the rugged cross of honesty to the Calvary hill of painful self-discovery. That has been stripped naked, crucified with arms spread wide in humble vulnerability. That, aware of my strengths and weaknesses, sufficiency and want, and that of others, accepts and loves me and others.

The woman. The part of me that weeps in recognition of my woundedness. That believes there is more to life than woundedness and yearns for healing. That hopes there is another way and deeply desires to do something different with my woundedness than my all-too-practiced and self-defeating remembrance of past offenses, those done to me and those done by me.

Forgiveness. Not forgetting the offense, whether done by me or to me. But rather carrying with courage – not off-loading on others – the cross of my woundedness in my continued pilgrimage through life in this world. And taking hold of the freedom, my freedom to choose the inner voice to which I incline my ear. Simon who always reminds me how far I fall from God’s goodness or Jesus who, accepting me, in the words of the hymn, “just as I am without one plea,” says, “Your sins are forgiven. Now, go in peace.”

2 thoughts on “Finding the Freedom to Forgive, Part 5 of 5”